Something Else “Different” About Me – Pride 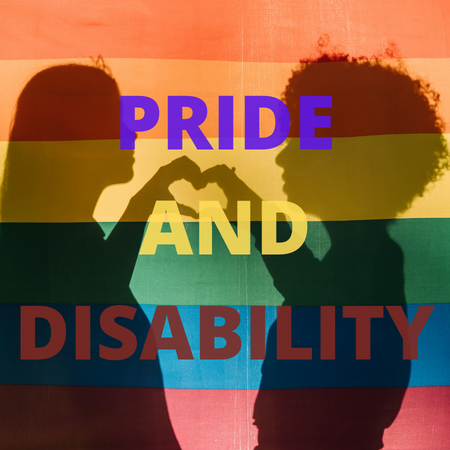 When I began to think about it I found that there were a number of similarities between my “disability” and being LGBT+. I have anxiety and a panic disorder, and that is the first similarity, it is a hidden disability. I also have the privilege of having what would be termed “straight passing” meaning that on first appearances I do not appear to be obviously LGBT. This coupled with my hidden anxiety and panic has meant that there are a number of things about me that I have kept, and continue to keep, hidden from others. From a young age, I have had it drilled into me to not show my anxiety, not tell anyone, and not make a fuss. Thus, I found it difficult to come to terms with a formal diagnosis and later became registered with the Disability Service in college. It is the same with my sexuality, I had repressed my feelings for years during school, only coming out to anyone when I entered college. However, I got a similar reaction from my parents when I eventually came out to them- keep this to yourself, be careful who you tell, and it might make people see you differently, an echo of past conversations. And so, I had another part of myself to hide, to mask, to not let people in on.  This has led to a lot of internalising and doubt in myself and my identity. Since I don’t fit into a stereotypical lesbian image am I faking the feelings that I feel? Am I just overreacting to the insane panic I feel before ordinary activities? Does everyone feel this, and if so, how does everyone cope with this? If this is normal, then is there something seriously wrong with the way humans are designed?

Another thought that was racing through my mind was the connection between LGBT and mental illness. I couldn’t help thinking “Am I gay because I have a mental illness, or do I have a mental illness because I am gay?” I have since tried to convince myself that these two things are not correlated. Yes, my sexuality and the extra stresses that come with it do cause a certain level of anxiety, but it is not the sole cause. I have had problems with anxiety and panic and a whole other list of side effects caused by it since I was a very young child long before I began questioning my sexuality. I have found it different and sometimes difficult to open up to people and to seek support for my mental health due to past messages of keeping it hidden, and I still have a tendency to deal with things on my own. But, I am growing to accept who I am and my small differences. I am fully aware that I do have the privilege of a hidden disability as it is not obvious and of having straight passing, however, this Pride I thought I would take this opportunity to explore and discuss two parts of my life that I have consistently hidden from others.

These widgets are displayed because you haven't added any widgets of your own yet. You can do so at Appearance > Widgets in the WordPress settings.